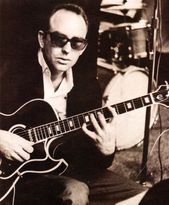 Howard Mancel Roberts was born on October 2, 1929, in Phoenix, Arizona. A self-proclaimed "desert rat," he began playing the guitar at an early age. Howard received his first instrument, a Gibson Kalamazoo acoustic costing about $18.00, when he was 9 years old. He began sitting in with local jazz musicians when only 11, and turned pro by the time he was 15; working then with the likes of Art Farmer and Pete Jolly. Roberts studied guitar with Horace Hatchett during this period and was introduced to the styles and techniques of players like Django Rheinhardt, George Van Eps and Barney Kessell. His training with Hatchett was supplemented with guitar playing and learning insights from Howard Haitmeyer. He also studied the Schillinger system of composition, a mathematical approach to music, with Fabian Andre when he was 17.

In 1950, Howard made a fortuitous move to Los Angeles. He lived a vagabond life, subsisting on chocolate chip cookies, sleeping in cars, and jamming in after-hours clubs before meeting arranger-guitarist Jack Marshall at the Hague through Barney Kessell. Howard consequently met, proved himself and worked with L.A.'s best musicians including Bobby Troup (who wrote "Route 66") and Chico Hamilton. On the basis of his considerable abilities, he was rapidly drawn into the inner circle of the L.A. music scene receiving rewarding work in the recording studios, TV, on tours and as Director of Guitar Curriculum for Westkake College of Music (the first accredited vocational music school in the U.S.). He divided his efforts as jazz artist, touring and studio musician and educator in the fifties. His contract with Verve Records produced several fine Roberts jazz guitar albums including the early bop guitar classics Mr. Roberts Plays Guitar and Movin' Man and the adventurous Velvet Groove.

In the sixties Howard was one of the busiest recording artists in the world. He signed a new record deal as a leader with Capitol Records and released an excellent and eclectic series of albums for the giant label. Landmark recordings of the catalog include Color Him Funky, H.R. is a Dirty Guitar Player, Somethings Cookin', Whatever's Fair, Jaunty Jolly, and Goodies. His work featured solid bebop playing on standards and show tunes, blues, gospel, funk, and even rock and pop numbers. As such Howard Roberts was the prototype fusion guitarist. Who else but Howard could make a pop throwaway like "Winchester Cathedral" swing as hard as anything played by Wes Montgomery or Joe Pass? In the studio Roberts became one of the most listened-to guitarists in contemporary music, lending his unique and musical touch to movie soundtracks and TV shows like The Twilight Zone, The Munsters, I Dream Of Jeanie, and The Beverly Hillbillies. He also recorded with Frank Sinatra, Elvis Presley, Ray Charles, Sammy Davis Jr., the Beach Boys, Merle Travis, Nat King Cole, Little Richard, Ella Fitzgerald, Sonny and Cher, the Jackson Five, Rick Nelson, the Supremes, and literally countless other stellar performers on hundreds of session dates. He earned the title of "the fifth Monkee," as he played on virtually everything the group recorded in the 1960s. At that time Howard designed the Epiphone Roberts model guitar and formed the Benson amplifier company. He epitomized the persona of the guitar virtuoso/studio whiz which established the pattern followed by Larry Carlton, Lee Ritenour, Steve Lukather and many others in the ensuing decades. That of living legend, a hot player burning up the studios by day and bringing down the house in jazz clubs by night. Some of this legendary playing thankfully has been captured, preserved and released on CD by V.S.O.P. Records in the Howard Roberts "Magic Band" live sessions from Donte's.

In 1970 Howard became more deeply involved with education. He founded Playback Music Publishing Company to upgrade the state of contemporary guitar literature. Amidst his hectic playing schedule he wrote an innovative series of instruction books such as The Howard Roberts Guitar Book, Chord Melody, Sight Reading, Super Solos, Super Chops, and Instant Blues. Out of this series grew the Howard Roberts Guitar Seminars of the 1970s and eventually G.I.T. (Guitar Institute of Technology), the world's first vocational school for guitar, now known worldwide as M.I. or Musician's Institute. The material Howard developed in his books and seminars was the basis for the core curriculum at the institute. He expanded many of these initial concepts in his Praxis and Chroma systems for guitar education. Roberts even anticipated distance learning, interactive correspondence programs, and the educational implications of the internet, though it didn't yet officially exist in the mainstream, in a conversation we had back in 1991.

Howard redesigned the Howard Roberts model for Gibson in the seventies and added the innovative thin-body Howard Roberts Fusion guitar. He moved to Edmonds, Washington, in the eighties. Roberts continued to develop his groundbreaking educational programs until his death on June 29, 1992, at the age of 62.